Burning lungs and aching knees overwhelmed Svyatoslav’s senses, his chest heaving as he sank to the ground. [SETTING: PROFICIENT] He was hidden from sight in the nook of a doorway pressed into the dirty brick wall of an alley. It was dark and wet, a gentle contrast to the heat and rage that seemed to consume him. It took all he had not to scream, but he knew he could not afford to be caught. Shrugging his backpack from his shoulders, he dragged it to sit in front of him tucked between his legs. There was a distant shout and the sound of police sirens that caused the blond boy to jump, but he did not look up from his task of stuffing his stolen food away to save for a later time. He pulled the zipper of his pack only to discover it was jammed. “Черт возьми,” he cursed under his breath, a low glow becoming evident beneath his skin. He did not stop pulling at the zipper until his fingertips were red and the cheap plastic melted under the hot pressure he applied. He grit his teeth in anger and heaved the backpack over his head, launching it forward and against the alley wall opposite of where he was sitting. His sparse belongings spilled across the ground.

[CREATIVITY: DISTINGUISHED] Pulling his knees to his chest, he leaned forward and awkwardly pressed his forehead against them. He was tall and slim, a body he had not yet grown into. [CHARACTER ATTRIBUTES: DISTINGUISHED AND ORIGINALITY: PROFICIENT] The dreaded but familiar heat began to build stronger in his core and spread throughout him and his chest tightened with the fear of exploding right where he sat. Would he? The thought filled him with guilt as he remembered what had happened the day before he ran from his home. He recalled the painful boil in the pit of his stomach and the burst of searing energy that ran through him and his surroundings melting from a bright white to a cold black, and he awoke to a destroyed home and injured mother and sister. A frustrated sigh escaped him. Why was he like this? Were there others with abilities like his? He ran his fingers through his greasy hair and gripped the light strands to pull at them in frustration. Tears burned behind his eyes and he brought his thoughts back to what had happened just before he found this alley, asking himself: were a few bags of chips really worth it?

[CHARACTERS: PROFICIENT] It had been just over three years since he had run from his home, and he was only 17 years of age. Life on the streets had been surprisingly smooth for him; he bounced from shelter to shelter, made friends in the homeless community of the area in which he finally settled, and had made what most would consider to be a best friend. His best friend was the only consistency in his life, and he quickly became dependent on him. His name was Michael, and he and Yato had been inseparable from the day they met. They had become each other’s support systems, and never imagined it would come to this.

[STORY IDEA AND CHARACTERS: PROFICIENT] Michael had been roaming the streets for much longer than Svyatoslav. Since he was 7, he had said, and he seemed proud to announce it. He taught Svyatoslav everything he knew, even gave him a nickname. As he’d like to say, “those fancy Russian nicknames are too long for me,”, so Yato it was. He was always slicker than Yato, persuasive with his language and sly with his hands. Normally, picking food from the shelves of convenience stores was easy for him. Today, however, was different. The blond and brunet sauntered in to a small gas station store in the outskirts of Seattle, an air of confidence around the both of them despite their rugged and dirty appearances– maybe that had been it? Could that have been what led to the store owner’s suspicion? – It was a routine run: pick a store to which they had never been, grab the cheapest item they can, grab others and hide them away in their backpacks (never anything more than a bag or two of chips or a pre-made sandwich), buy the cheap item using money gathered from the people willing to give to divert suspicion. Simple.

[PROBLEM/CONFLICT: DISTINGUISHED] Yato should have expected something was wrong. He should have been able to realise it on the cashier’s face and how he spoke down to them as he rang up the packs of gum they chose to buy. It was not until the last second that the man behind the counter gestured to their backpacks. “What did you take?” he demanded to know.

They both feigned nonchalance, but Yato would be lying if he said he remained as calm as his partner seemed to. “What do you mean?” Michael asked, stepping back angrily like he was offended by such a suggestion.

“I’m not stupid, show me your bags.” The man behind the counter’s voice raised and became more insistent as he leaned over the counter separating them and extended his hand to accept the bags. Michael cast a sideways glance in Yato’s direction and their eyes met for a split second before they both bolted from the store. “Hey!” the cashier yelled, rushing after them. They rounded the corner and, god, were they unlucky. A police officer stood calmly by his car, staring curiously at the running pair as they passed. When the cashier barreled down the street after them, the officer sprang into action and joined the chase.

The young boys’ endurance was draining and the policeman behind them was gaining quickly. Yato was only a step or two ahead of Michael when it happened. The officer dove for the brunet and they both collapsed to the ground in a mess of limbs and angry yelling. A moment passed and Yato’s friend was subdued. There was a moment of hesitation and the free boy nearly tripped over his own feet as he kept down the street and took several turns throughout the grid of the city before finally settling in the alley where he now sat.

Tears finally spilled from his reddened eyes, and he quickly pulled his sleeve over his hand to wipe angrily at his face. He pushed himself to his feet and gathered the items that had fallen from his backpack, moving them with him in the small covered corner. He yanked a partially wet blanket from the bottom of his bag and unfolded it, draping it over himself as he lied down on the cool pavement. He rested his head on his backpack and forced himself to close his eyes. The heat and anger melted from his body as he drifted to sleep.

With how exhausted he had been in earlier days, it was not a surprise that almost as soon as he settled he fell asleep. It was such a shame how quickly it flashed by. Dreamless sleep was a blessing but also a curse, and once Yato awoke, he would have given anything to feel as though his unconsciousness lasted. Sleep was a distraction from the loss of his best friend, and he wanted more. He sat up with a sigh, his joints popping in protest of his movement, as the pavement had not been kind to his comfort. [SETTING: PROFICIENT] He stood and sauntered from the alley, peering through the tall buildings to see the waterline. The sun was setting on the ocean in the distance and the blond hadn’t any idea how long he had been asleep for. He wasn’t sure if he cared.

[CHARACTER: PROFICIENT AND CHARACTER CREATION AND DEVELOPMENT: DISTINGUISHED] There was a long period of nothing after that day, and Yato found himself right back where he began: he was a nobody with nowhere to go and no one to rely on. He blamed himself for what had happened, and found it difficult to move on from the loss of who had kept him alive for the past two years. The guilt continued to build, as he considered the third person he had let down in his lifetime.

[CREATIVITY: DISTINGUISHED] He never would have expected his life to take the drastic turns it did. He became more aware of other people like him. The woman on the street whose feet seemed to hover a centimeter above the ground as she walked, the famous track athlete that was always a step ahead from the rest of his competitors. ‘It’s like he’s not even human!’ many people would say, and Yato knew that he wasn’t. The “street performer” who possessed an ability to walk through walls and move objects without touching them. He felt less alone despite his loss. In a way, he considered the loss of his best friend a turning point. He learned to be independent, soon finding himself with a job and eventually a place of his own to stay.

[SETTING: PROFICIENT] Much time had passed and a twenty year old Svyatoslav was standing in the hallway just outside the door of his apartment. It was already furnished, he had been told, and the excitement in him made him tremble. He turned the key over in his hand and stared at the deep brown color of the door. He didn’t snap out of the trance he had seemed to be in until a neighbor opened the door just to the right of his and said something to him. He had not heard, and simply smiled and nodded in response so as not to offend them. They closed their door after another moment and finally, Yato stepped forward to push the key into the lock and twist it. The door slowly swung open and the blond seemed to hesitate before stepping in. It was all so foreign to him, the coziness and cleanliness of it all. He walked through the kitchen and into the connected living room, running his hands over the rough fabric of the couch that sat in the middle of the room, accompanied by a rickey, stained wood table with a lamp atop it. He turned the lamp on and moved away, deciding to look at the bedroom.

He did not waste any time before falling into the small bed pushed against the inner corner of the room. He laid flat on his back, staring at the pale ceiling above him with a wide smile. It had been six years since he had laid in a bed of his own, and he was happy. 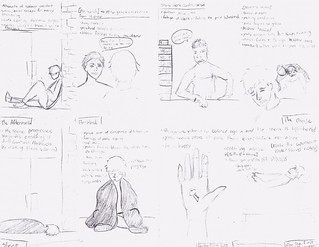